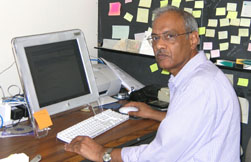 Ramesh Gupta came to SIUC in 1984 after completing his Ph.D. degree and postdoctoral training with Professor Carl R. Woese at the University of Illinois at Urbana-Champaign. He was appointed Chair in 2007.

Our current research interests are in the areas of post-transcriptional RNA modification in Archaea and Eukaryotes, and apoptosis and cell cycle progression in human cells. Archaea is one of the three domains of life; the other two being Bacteria and Eukarya. Archaea often have eukaryote-like processes, but at a basic level. Therefore, they can serve as much simpler model systems to gain insights into complex eukaryotic events. Some archaeal proteins involved in RNA processing have acquired additional roles in the biology of eukaryotes.

The tRNAs and rRNAs of all organisms contain many different types of nucleotide modifications. In eukaryotes, most pseudouridines (Ψ) and 2'-O-methylated residues of rRNA are produced by snoRNPs (small nucleolar ribonucleoproteins). The RNA components (box H/ACA and box C/D RNAs) of the snoRNPs function as guides to select the sites of target RNA modification and protein components catalyze the modification. Archaea also contain similar guide RNPs. It is easier to study structure-function relationships of the components of these RNPs in archaeal systems than in eukaryotic systems. We have developed several in vitro and in vivo archaeal systems to study these relationships. We have used these systems to characterize structural requirements of several guide RNA and protein components of the RNPs.

Most tRNAs of Bacteria and eukaryotes have ribothymidine (T) and Ψ at positions 54 and 55, respectively, in their common (TΨC) arm. In Archaea, Ψ is the most common nucleotide at both these positions. We have shown that the Pus10 protein produces both these Ψs in Archaea. This protein is distinct from the TruB/Pus4 family of Ψ synthases that produce Ψ55 in Bacteria and eukaryotes.

Mammalian cells also contain the Pus10 protein. So far it has not been shown to have any Ψ synthase activity. Our current work suggests that human Pus10 does have tRNA pseudouridine synthase activity, but it is restricted to only some specific tRNAs. We are now determining how only certain human tRNAs are selected for Pus10-mediated pseudouridylation.

The human PUS10 gene has been suggested to be involved in TRAIL-induced apoptosis. Apoptosis or programmed cell death is a genetically determined mode of cell death. It is important for natural cell turnover during development and aging, and in the elimination of virus-infected and damaged cells. It is of clinical relevance for cancer treatment by irradiation or drugs. There are two major pathways of apoptosis: extrinsic (death receptor) and intrinsic (mitochondrial).

Recombinant TRAIL can induce apoptosis in several types of cancer cells, but leaves normal cells unaffected. Therefore, it is being developed as a drug for cancer treatment. We analyzed the role of PUS10 in TRAIL-induced apoptosis. PUS10 is mainly present in the nucleus. Early during apoptosis, PUS10 translocates from the nucleus to the mitochondria via CRM1-mediated export with the concurrent release of cytochrome c and SMAC from the mitochondria. Caspase-3 is required for PUS10 translocation, which reciprocally amplifies the activity of caspase-3 through the intrinsic/mitochondrial pathway.

Zofallova, L., Y. Guo, and R. Gupta. 2000. Junction phosphate is derived from the precursor in the tRNA spliced by the archaeon Haloferax volcanii cell extract. RNA 6:1019-1030.